Lean: not just a hype word for efficiency

Yah sure, we do “lean” here and we operate a tight ship with just a few of us doing everything – you know, everyone is multi-taskin’.

“Lean” is such a convenient term, everyone uses it in their own definition. People frequently use “lean” in place of “efficiency”, probably because it sounds more cool. Another round of cost cutting? Sure, let’s tell everyone we’re “going lean”, again!

Lean is a proven, powerful productivity approach (we probably owe post-WWII modernity and the internet age to Lean!), yet most people don’t know what Lean is really about beyond the hype. And in this age of hyper-competition, not knowing nor using tools that are proven to work, is a big disadvantage.

Post WWII, Toyota shop floor engineer Taiichi Ohno rose through the ranks with the backing of Eiji Toyoda from the founding family, to install what became TPS (Toyota Production System), which in turn later became generally known as Lean Manufacturing.

Meanwhile, two industrial engineering mavericks were flown into Japan at the request of the Union of Japanese Scientists and Engineers: W. Edwards Deming and Joseph Juran. In the US, both of their work on quality management only came to mainstream attention in the late ‘80s when the concept of Lean Manufacturing started to emerge. But in Japan, Deming’s and Juran’s teachings, overlapping but somewhat different in approach (Deming more a statistical approach, while Juran more focused on management), were immediately embraced since they first set foot on Japanese soil circa 1950.

Taiichi Ohno was for sure the driver behind TPS, but it was not just him. It was the engineers at the Gemba (where things are happening, e.g. the factory floor) that voraciously absorbed and applied the many new teachings and discoveries happening within and brought into Japan, that made the radical shift from pre-war Mass Production to post-war Lean Manufacturing happen. The bottom-up culture of Lean was present from the onset.

Wikipedia’s summary of Lean Manufacturing is spot on so here’s the share:

“Lean Manufacturing is a systematic method for waste minimization (“Muda”) within a manufacturing system without sacrificing productivity. Lean also takes into account waste created through overburden (“Muri”) and waste created through unevenness in workloads (“Mura”). Working from the perspective of the client who consumes a product or service, “value” is any action or process that a customer would be willing to pay for.”

While practices such as JIT (just-in-time inventory management) is specific to the manufacturing industry, many of the Lean Manufacturing concepts are applied and relevant to all other industries:

Most famously known by Eric Ries’ 2011 book of the same title, Lean Startup originated after Steve Blank, back in 2004 taught Ries (Blank was a lecturer at UC Berkley), and invested in his start-up. Ries promptly burned Blank’s money and from that learning, Lean Startup was born. (Blank is also the author of the 2005 book Four Steps to the Epiphany which not surprisingly is the genesis of Ries’ later Lean Startup.)

Lean Manufacturing and Lean Startup are actually apples and oranges. They have fundamentally different objectives, solution applications, users and modalities: 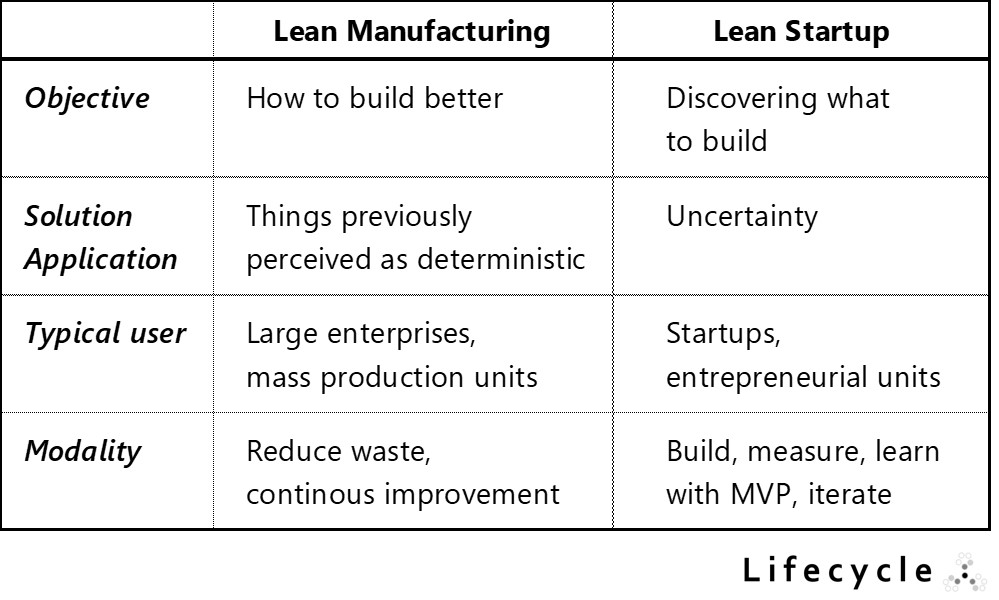 In short, Lean Manufacturing is about “how to build better”, and Lean Startup is about “what to build”; the former more catered to established enterprises running mass production, and the latter for entrepreneurial businesses developing new products in untested markets.

Ries defines “A startup is an organization designed to create new products and services under conditions of extreme uncertainty.” Ries developed Lean Startup out of desperate needs: the timing that Ries was running his startups was post dot-com crash and access to capital was tight, yet the internet thing was here to stay and the opportunity set was apparent. How to find product market fit fast and cheap was a matter of survival.

Lean Startup is a modern update of the age old adage of “trial and error”. The refinement lies in the concept of Minimum Viable Product, or MVP. In a traditional product development cycle (i.e. waterfall), product release is a final state and goal, so “oops, let me try it again” doesn’t exist. If the product doesn’t fly, either it gets abandoned, or a new product development cycle takes place – it’s time consuming and expensive to fail in waterfall. Lean Startup is revolutionary because it makes failure cheap, fast, and most importantly, welcome.

Ries stresses that “”Learning” is the essential unit of progress for startups.” At first, there are assumptions. “I have a great product idea” is a hypothesis and it needs to be tested. The most direct way to test a hypothesis is to run an experiment. A really simple version of the product that represents the hypothesis will be needed for that experiment, hence build a Minimum Viable Product.

With the MVP, tests are conducted and the results and other findings are measured. From the measurements, you want to learn if the hypothesis was valid, somewhat valid, or invalid – Ries labels this “validated learning”. This whole cycle from hypothesizing all the way to validated learning is called “Build-Measure-Learn” in Lean Startup.

Validated learning from the experiment should not just answer “Should this product be built?” but also “Can we build a sustainable business around this set of products and services?” Ries therefore suggests to test the hypothesis “I’ve got a great product idea” on two fronts:

It would be highly unlikely that the “great product idea” will pass both the Value Hypothesis and Growth Hypothesis on the first MVP attempt. Hence, Build-Measure-Learn iteration follows. Tweak and try again, persevere and try again, and if it still doesn’t work, have the courage to pull the plug and meanwhile if a better idea comes up, pivot.

Again, the importance is not to just prove the value of your product, but also to find a way to build a business around it. Seemingly outside-of-the-product items like product packaging, labeling, user instructions and community support are important product attributes as well, and these are things that also need to be experimented and validated. (I’ve written more about this in a previous article: “Great product, not selling.)

Lean, as in the singular term, is a synthesis among the two streams of Lean Manufacturing and Lean Startup and anything in between, so there’s no official definition of Lean (nor can anyone claim it). Even Wikipedia does not have a dedicated description for Lean – the page is simply a list of the various branches of Lean.

Though from observation, I think people generally associate Lean with the following three core ideals:

For the Lean professional who has learned and internalized the major tools and processes of both Lean Manufacturing and Lean Startup, it really doesn’t matter which stream of Lean they are applying to the project right in front of them. Lean Manufacturing is not exclusive to large factories – startups who are at scaling stage going into model year production will be using Lean Manufacturing. And likewise, there’s no reason why a product development unit with a large manufacturer shouldn’t be using Lean Startup. The key is contents, not labels. Even between Lean and Agile, the boundaries are blurred. Just use what works to your advantage.

The “L” in Lean is for Learning

For myself, the most important keyword that I associate with Lean is “learning”. Every activity in Lean, whether it is from Lean Manufacturing or Lean Startup, demands inquiry and learning, and that is precisely what Learning Organizations are about. The same can be said for Lean’s doppelganger Agile, and that is the reason why I am a big advocate of Lean & Agile. 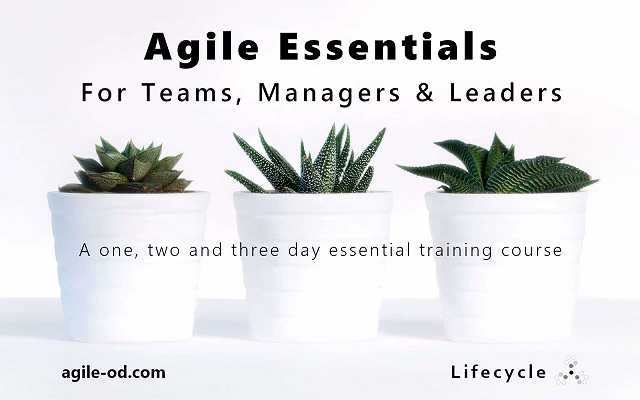 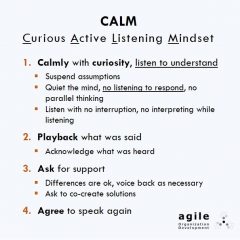 Receiving critical feedback is dreadful. Our defensive routines get triggered and however we might understand... 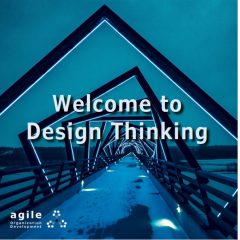 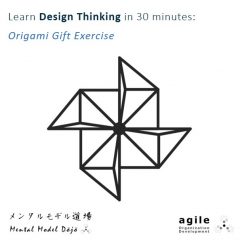 Here’s a rapid Design Thinking practice exercise that I do in my training sessions. It’s... 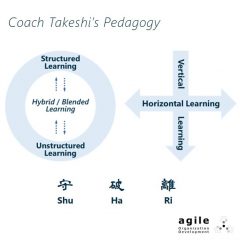 I use three mental models to describe my pedagogy (theory and practice of education): Structured... 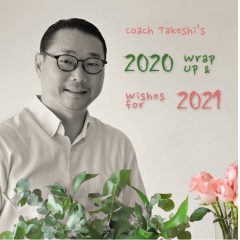 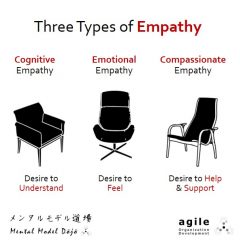 There are three types of empathy: cognitive, emotional and compassionate empathy; each respectively the desire... 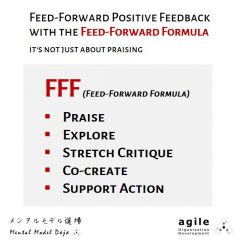 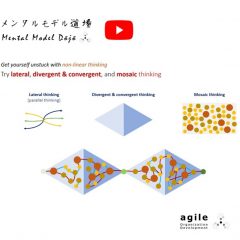